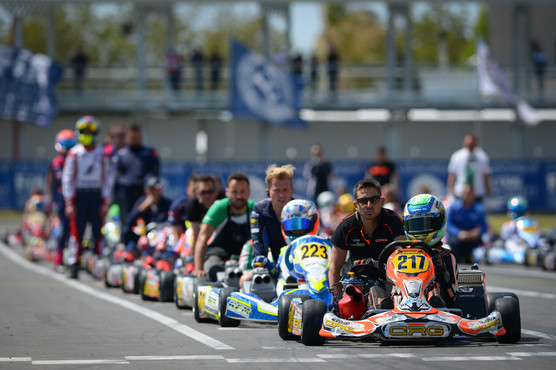 A fiercely contested Competition launched the CIK-FIA 2017 European Championships on the Circuito Internazionale Napoli of Sarno. Two young talents proved themselves against  numerous and tight opposition, Jonny Edgar in OK-Junior and Theo Pourchaire in OK, while Paolo De Conto finally won in KZ.

“I am very happy with the first European Competition of the year”, said Kees Van De Grint, Vice President of the CIK-FIA. “Everything went well on the new track at Sarno and the young drivers showed excellent abilities against their elders. I especially congratulate the winners of the OK and OK-Junior categories for their brilliance. However, my heart remains heavy because of the accident that cost the life of Gonzalo Basurto Movila, an 11-year-old Spaniard, on the Fernando Alonso circuit in Oviedo. All my thoughts are with his family in these difficult times. The CIK-FIA has initiated investigations to find out the reasons for the tragedy which occurred on a homologated circuit.”

To return to Italy, there was battle at levels from the Qualifying Heats onwards, whose importance was reinforced by the removal of the Prefinals. This measure, designed to prevent well-placed Drivers from being deprived of the Final at the last moment, increased the overall fairness of the Competition.

In OK-Junior, two newcomers in the category disputed the final victory after dominating the start of the Competition. Team Forza Racing’s Jonny Edgar (Exprit / TM Racing / Vega) remained ahead of the Brazilian Gabriel Bortoleto (CRG / Parilla / Vega) from the factory CRG team, both of whom achieved exceptional performances for their first participation in the CIK-FIA Junior European Championship. O’Neill Muth (Zanardi / Parilla / Vega) of the Chiesa Corse team climbed up to the 3rd step of the podium. The top five was completed by two Britons from the Ricky Flynn Motorsport team, also new to Junior, Harry Thompson (FA Kart / Vortex / Vega) and Zak O’Sullivan (FA Kart / Vortex / Vega).