FIA AWARDED THE STRONGEST PAIRING IN THE WORLD MADE BY CRG 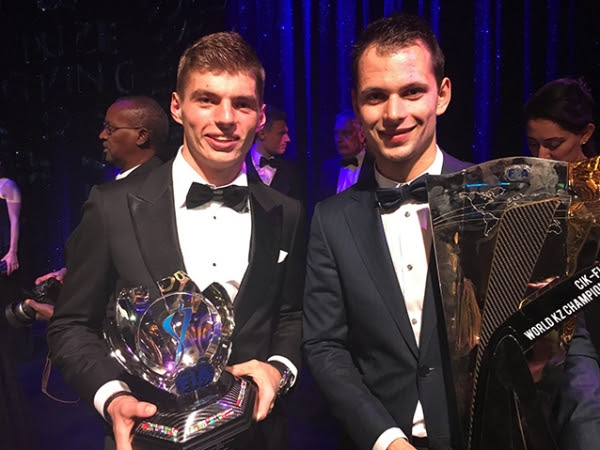 The yearly FIA Prize Giving Ceremony held on 4th December in Paris celebrated the 2015 champions. The young Dutch driver of CRG Jorrit Pex, 22 years old, got on the stage at the Lido on the Champs-Elysèes to receive the FIA 2015 trophy for his stunning victory of the KZ World Championship in Le Mans on 13th September.

Three awards were also given in Paris to the other Dutch enfant prodige Max Verstappen, 18 years old, who has been Jorrit Pex’s team mate at CRG until 2013 before becoming the Formula 1 rising star with Toro Rosso. Max Verstappen was celebrated for his excellent first F1 season receiving the FIA Personality of the Year(prize decided by a panel of journalists), the Rooky of the Year award (decided by the FIA Drivers Commission led by Emerson Fittipaldi) and he also was given the Action of the Year trophy, prize decided by fans for the best race action that he already received in 2014 for his great Formula 3 season. In 2013 Max Verstappen already won theDriver of the Year by WSK Promotion trophy for the victory, with CRG at 15 years of age, of the KZ World Championship, KF European Championship, KZ European Championship, WSK Euro Series KZ1 and WSK Master Series KZ2, all in the same year.

Verstappen and Pex, are a pairing of exceptional drivers born and bred at CRG, as other two stunning drivers awarded in Paris: the three times F1 World Champion Lewis Hamilton and Nico Rosberg, now team mates at Mercedes after being team mates at CRG until 2000.

Jorrit Pex has been the jewel in the crown of CRG’s 2015 Karting season securing the victory in the KZ World Championship. Pex also has the European KZ1 and WSK Euro Series 2012 under his belt, as well as four German KZ2 Titles from 2011 to 2014 all won with CRG.