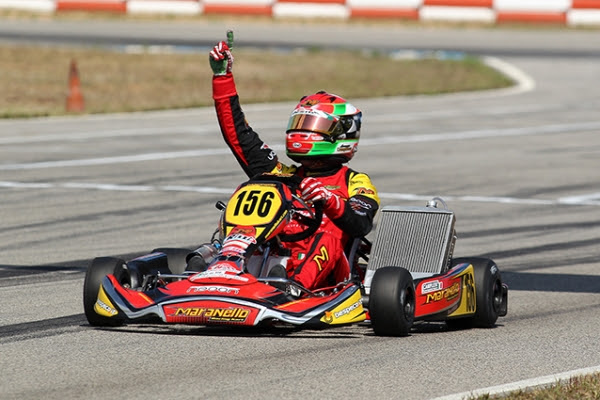 Lorenzo Camplese will be part of the Maranello Kart Racing Team again, alongside Marco Zanchetta, Nicolas Gonzales and Massimo Dante, to form an attack squad for KZ. All Maranello Kart’s targets for 2018.

Maranello Kart strengthened its 2018 lineup with the quick and competitive Lorenzo Camplese, who is back among the fields of the Italian outfit after winning the KZ2 Italian Championship with Maranello-Tm in 2014.

Lorenzo Camplese and Marco Zanchetta, alongside the other two top drivers of Maranello Kart, Nicolas Gonzales from France and Massimo Dante, will make up a particularly strong and effective team that is bound to get some further great results in national and international races during the forthcoming season.

Luca Iannaccone, Maranello Kart’s manager, commented the news in this way:“Season 2017 has been good for Maranello Kart on the Italian and foreign markets. We reached the targets we set ahead of us and we are starting again in 2018 with the same enthusiasm and hunger. Maranello Kart has always been an outfit with firm roots and in the recent years it managed to say competitive and matched up its rivals, while keeping its feet on the ground. I am proud to announce that we confirmed our drivers Zanchetta, Gonzales and Dante in KZ2 and that Lorenzo Camplese will wear again Maranello Kart’s colors in KZ. The Racing Team will be led as usual by our Team Manager Stefano Griggio and Tiziano Rizzi regarding KZ engines. A new collaborator, Marco Calore, will take care of the engines of Mini, OK and X30. Furthermore, we will kick off the season at the Winter Cup and we will renew our image with a new tent and truck to keep up the pace of our competitors. Our focus moved also to Mini 60cc and to Mini Rok, where the Romanian driver Alexander Iancu will make his debut, while in OK and X30 we are finalizing the agreement with some new drivers to make our debut also in WSK.”

Lorenzo Camplese’s comment on his comeback at Maranello Kart: “I am really excited to be back at Maranello, the team that allowed me to win the Italian Championship in 2014. Back then, we did a great job and I expect to have another strong season now. I cannot wait to start and to be back to a good level of competitiveness after my injury to the knee that stopped me for several months. I will start the 2018 season with the Winter Cup of Lonato, then I will take part in some WSK events and particularly in the European and World KZ Championships.”