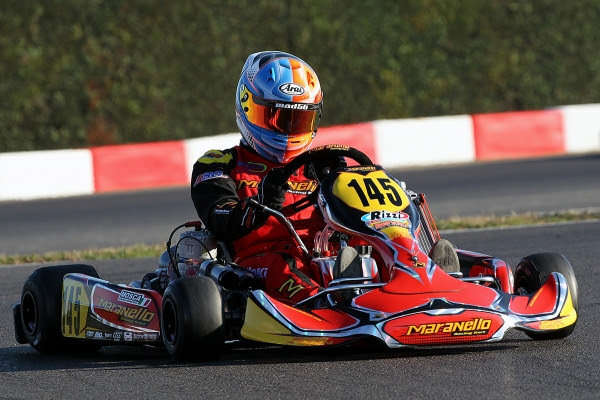 Tommaso Mosca put in a series of good races in KZ2 all the way to the Prefinal, while he had to retire from the Final due to an incident. Lorenzo Marin has also been shining with Maranello Kart’s colors in Mini Rok.

The young driver of Maranello Kart, Tommaso Mosca, has been a protagonist of KZ2 in occasion of his first exit of the year in the 21st Winter Cup of Lonato, the international early season appointment that saw 268 drivers at the start, including a lot of champions in the shifter category.

Tommaso Mosca came to the fore in this international appointment of KZ2, as he has been showing good speed in all the phases of the event on Maranello-Tm with the official assistance of SG Race led by Stefano Griggio and with engine support by Rizzi.


Unfortunately, Mosca has been involved in an incident in the Final, but the 16 years old Italian from Brescia had been putting in great performances being always among the front runners up to that point. Following the 10th place in qualifying of his group 3 – tenths off the pole position – and the 14th place in the heats (with a great eighth place in his third race), Mosca completed a great comeback race in the Prefinal, installing himself in P6 and setting laptimes that were among the absolute quickest. The young driver of Maranello Kart had unfortunately to retire during the second lap of the Final, a race that would have certainly seen him among the protagonists.

Maranello Kart’s colors in Mini Rok have been defended by the very youngLorenzo Marin, with the assistance of Team Maranello KCL Racing, who completed a stunning comeback challenging the top 105 drivers in this international level category. Marin pushed hard in the heats, recovering from the 40th place of qualifying to the victory of the last heat, and earning his place among the finalists. Marin secured a promising 10th place in the Prefinal, but he was unfortunately forced to an early retirement in the Final. His performance has nevertheless been very positive and absolutely encouraging for the remainder of the season.

tags: maranello
previous COOK TO COMPETE IN CHALLENGE OF THE AMERICAS EVENT THIS WEEKEND
next CRG IN CASTELLETTO FOR THE WSK SUPER MASTER SERIES