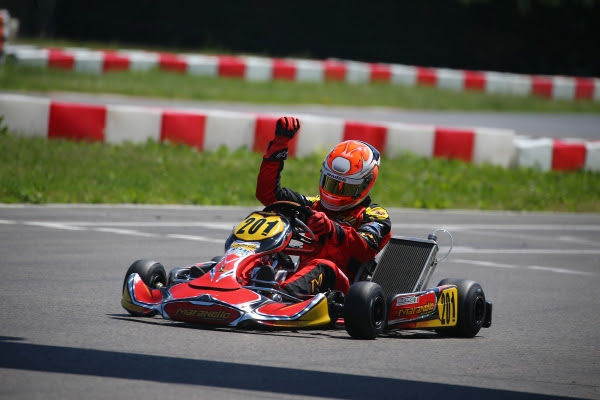 Miastkowski dominated KZ3 taking the win in the absolute and Junior classifications in Lonato. Corti won KZ3 Over.

The second edition of the South Garda Karting Trophy has brought a good number of drivers to Lonato and Maranello Kart has been protagonist in the national categories as well as in the Rotax Trophy North Area.

MIASTKOWSKI AND CORTI VICTORIOUS IN KZ3

Marco Miastkowski scored a very nice victory in KZ3 on Maranello-Tm. He put in a stunning performance not only in KZ3 Junior, but also in the absolute classification that comprised classes Under and Over. Miastkowski dominated the Final taking the victory after posting the quickest time in qualifying and being second in Prefinal. Miastkowski managed to take an early lead in the Final, keeping it all the way to the flag. Maranello Kart also claimed the victory in KZ3 Over with Gianni Corti, who won his category and was sixth in the general classification.

Pietro Ragone and Andrea Perduca have put in strong performances with Maranello Kart in category Mini of the Rotax Trophy. Between the two, Pietro Ragone achieved a better result in the Final, closing his effort in P5, whileAndrea Perduca crossed the finish line in seventh place.

Davide Spagni has also contested 60 Mini with Maranello Kart, but he had to retire early from the Final after ending the Prefinal in sixth position.

The next race for Maranello Kart’s drivers is scheduled for May 26-28 at the International Circuit Napoli of Sarno in occasion of the second round of the Italian ACI Karting Championship.

tags: maranello Marco Miastkowski Miastkowski
previous DKM AT THE ERFTLAND WITH A STRONG FIELD OF PARTICIPANTS
next FOUR WINS FOR TOP KART USA IN PITTSBURGH