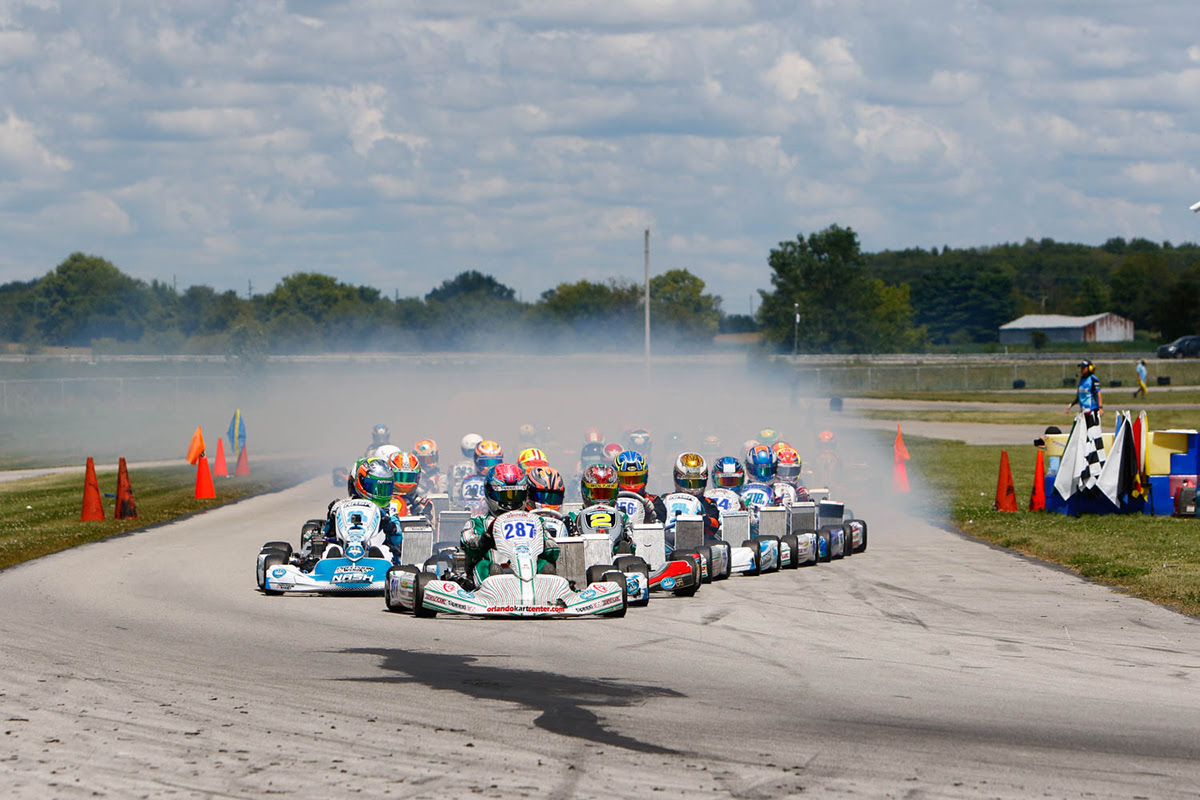 “Podiums for Fairbairn and Maxson while complete team impresses”

With back-to-back events at the racy New Castle Motorsports Park facility just east of the motorsports capital of the world, Indianapolis, Indiana, six Speed Concepts Racing (SCR) drivers were looking to carry the momentum into the final round of the SuperKarts! USA (SKUSA) Pro Tour. With the annual SummerNationals in the Midwest in August, three SCR drivers would enter the talent-laden IAME X30 Junior class while three others would look to flex their muscles in IAME Mini Swift.
“Indiana has been good to us,” claimed Mike Speed, Owner of Speed Concepts Racing. “The SuperKarts! USA series is the best and most competitive in the country and to stand on the podium with two different drivers says something about our program. Our Mini Swift drivers were also very quick but luck was not in all of their favors this weekend.”
Leading the way for Speed Concepts Racing
was a trio of X30 Junior drivers in Jeremy Fairbairn, Tyler Gonzalez and Tyler Maxson. Though Gonzalez has had his share of success including race wins and championships along the way in 2017, the New Castle event weekend would see him run consistently near the front of the field and close the Pro Tour with sixth and fourth place finishes.
However, it was Fairbairn and Maxson who rose to the challenge this weekend. Tyler Maxson secured a solid second place podium result on Saturday and backed that up with a tenth place finish Sunday after qualifying outside the top-20. Fairbairn was one of the fastest junior drivers all weekend and while running in the top-five Saturday, had to take evasive action to avoid collecting his teammate in an incident that was no fault of his own. After falling to 29th, the Floridian put on an impressive drive forward to finish 17th before eventually being classified in the 21st position after post race penalties. Rebounding on Sunday, Fairbairn scored the X30 Junior prefinal victory and accompanying pole position for the day’s main event. Jumping out to an early lead, Fairbairn would lead the majority of the main events laps before falling to second and narrowly missing the victory by a scant .005. Though disappointed to not claim the checkers, the junior trio have shown they are a threat each and every race weekend.
The IAME Mini Swift field would see 47 competitors on the weekend with three hailing from the Speed Concepts Racing camp. Alex Powell would score the team’s best finishes claiming a fifth place result on Saturday, backing that up on Sunday as he closed the weekend in eighth. Poised for his second top-five result on the weekend, Powell was a victim of an incident in the closing stages that pushed him back in the finishing results. Maturing and gaining experience with every event, Powell is a young driver that has a bright future under the Speed Concepts Racing banner.
Fellow SCR and Mini Swift drivers Kyffin Simpson and Paul Bocuse showed speed throughout the weekend but if they did not have bad luck, they would have had no luck at all. After running near the top of the time charts on Friday’s practice sessions, Simpson would qualify well but finish 17th and 23rd on the weekend while Bocuse would end his Pro Tour event in 31st and 29th.
Speed added, “The SCR Mini Swift drivers are still very young and gaining experience with each passing weekend. Paul and Kyffin had some bad luck this weekend but racing is like that, and they will both rebound at future events.”
Speed Concepts Racing will now take some time away from the track after a long run of successful events and prepare for the latter half of the 2017 season.
Be sure to follow Speed Concepts Racing on Facebook, Twitter and Instagram as they continue to evolve and develop their social media programs. Look them up at ‘Speed Concepts Racing’ or @SCR_Karting.
tags: Jeremy Fairbairn otp SKUSA Tyler Gonzalez TYLER MAXSON
previous CIK-FIA EUROPEAN CHAMPIONSHIPS OK - OKJ - KZ - KZ2: THE NEW EUROPEAN CHAMPIONS ON MOTORS.TV
next DYLAN TAVELLA IS THE SUPERKARTS! USA X30 JUNIOR CHAMPION