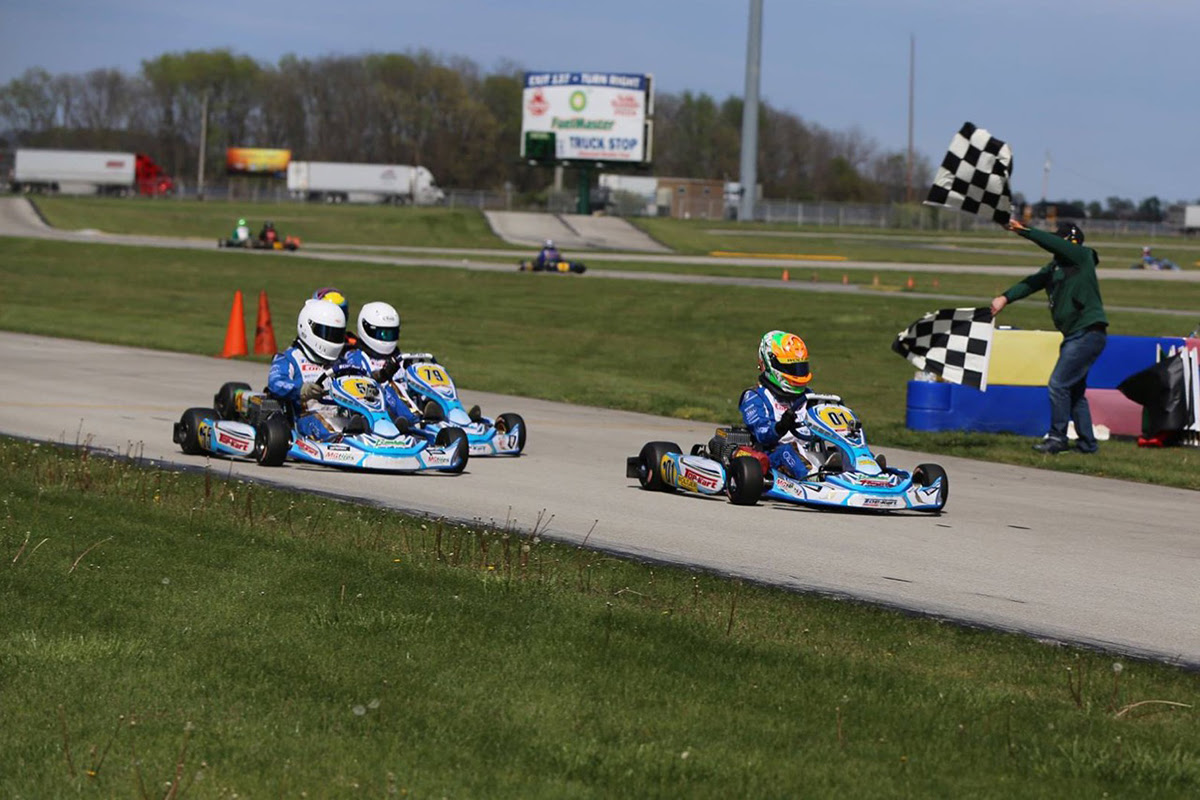 “Three wins and nine podiums for the Indiana-based squad”
The Top Kart USA squad topped the charts at the season opener of the Route 66 Sprint Series this past weekend at New Castle Motorsports Park. The team came into the event with a strong 19-driver line-up, ready to kick off round one of the series with impressive results. At the end of the weekend, three pole positions, three wins, and nine podium finishes were garnered by the Indiana-based team.

“This weekend was a fantastic weekend for not only our brand but for all of our customers,” explained Bill McLaughlin Jr. “The new 2017 Twister continues to impress in every category it competes in. Not only winning both days in the lower horsepower classes but setting fast lap of the race and winning in the X30 category. I would personally like to thank each and every one of our loyal customers and families for supporting our brand and we can’t wait to see each of you winning on your Top Kart!”

A good looking crew at Top Kart USA (Photo: Blake Deister)
Twelve Top Kart drivers hit the track in the Yamaha Senior category. Carter Pease kicked off Saturday by securing the pole position in qualifying. BrandonLemke brought home the win in the final on Saturday, with Alexander Kardashian and Dakota Pesek following behind him in second and third, making it a Top Kart dominated podium. Carter Pease, Tyler Trent, and Kyle Carty all scored top-15 finishes in Saturday’s final. Brothers Jeremy Fierke and Josh Fierke both earned top-20 finishes. On Sunday, Lemke grabbed the pole in qualifying to start off the day. In the final, Top Kart drivers locked in the top-five quickest lap times with Pesek, Kardashian, Pease, Carty, and Josh Fierke. It was another podium sweep for the Top Kart team, with Pesek grabbing the win, followed by Kardashian and Lemke in the second and third spots. Josh Fierke improved to a seventh place finish in Sunday’s final. Pease, Trent, and Carty all earned top-15 finishes once again, with Jeremy Fierke close behind with a top-20 finish. Anna LeClair, Ryan Spierowski, Olivia Riedling, and Nick DeFronzo all had great runs both days of the event, showing improvement and consistency every session on track.

“This past weekend at New Castle Motorsports Park for the Route 66 Sprint Series was definitely one to remember,” says driver Brandon Lemke. “My Woltjer-powered Top Kart was great as soon as I was able to adapt to the new track layout and the new MG reds in the Senior class. Tim Shutt with Timmy Tech was awesome all weekend long; he really set the kart up near perfect every time I went out on track. Also, a huge thanks to AMK Race Products for helping me out and the great hospitality. These new Top Karts took a race to get used to, especially going back and forth with the Limited Late Model stock car, but I feel extremely comfortable now and ready to take on the rest of the season full force. With Team Top Kart USA, I can definitely see many wins soon to come!”

Kaden Wharff was impressive again at New Castle Motorsports Park
(Photo: Kathy Chruchill)
Wyatt Kessinger pulled double-duty for the weekend, running in the Kid Kart and IAME Bambino classes. In Kid Kart, Kessinger earned seventh place both days of the event. In IAME Bambino, he secured the pole position in qualifying on Saturday, bringing home a second place finish in the final. On Sunday, he landed himself on the podium once again with a third place finish.

In Mini Swift, Top Kart pilot Owen Mahle earned a ninth place finish in Saturday’s final. He was followed closely behind by his teammates Zachary Collins, finishing 11th, and Henry Williams, finishing 13th. Mahle and Williams both scored top-15 finishes on Sunday in the final, with Collins suffering from a DNS. Collins also pulled double-duty for the weekend, running in the Yamaha Cadet category as well. He secured another top-15 finish in Saturday’s final.

In X30 Junior, Kaden Wharff hit the track in his Top Kart chassis. Scoring a seventh place finish on Saturday, Wharff knew he had more to give. Changes were made, and improvements in Wharff’s driving allowed him to bring home the win on Sunday.

“What an amazing weekend Kaden had with his win in his Comet-powered IAME X30 TopKart, this being his fourth race in this class,” says Matt Wharff, Kaden Wharff’s father. “Until Sunday, Kaden had struggled with overdriving his kart. The team collectively continued working with him from data analysis to driver coaching, along with his teammate Brandon Lemke giving him some advice; then it all clicked. Kaden won the race on Sunday. It was a very emotional win for his mother and I. We wish he could have seen all the people cheering for him and how happy everyone was with the way he drove. I am still celebrating his win! I cannot put into words how thankful I am for the team we race for and their dedication, hard work, patience, and perseverance during this transition.”

Top Kart USA’s Blake Deister added, “The Route 66 event at New Castle was definitely one to remember. Very close battling every lap, coming down to the wire in many of the final events, we took the victory in. Large fields with national drivers made it competitive and exciting racing. The Top Kart drivers had the equipment and support they needed to get the job done on every timed official session for the weekend making it a 100% perfect sweep in the Yamaha Senior class. Even to highlight in the Sunday Final, Top Kart drivers set the first through fifth fastest lap times by five different drivers and we can’t be any happier about those results!”

The Top Kart team now prepares for their next event, the World Karting Association Manufacturers Cup event at the Pittsburgh International Race Complex

tags: Top Kart USA
previous MARANELLO KART AT THE OPENER OF THE ITALIAN CHAMPIONSHIP IN LONATO. ZANCHETTA AT THE START TOO
next 2017 KARTING REGULATIONS NOW POSTED