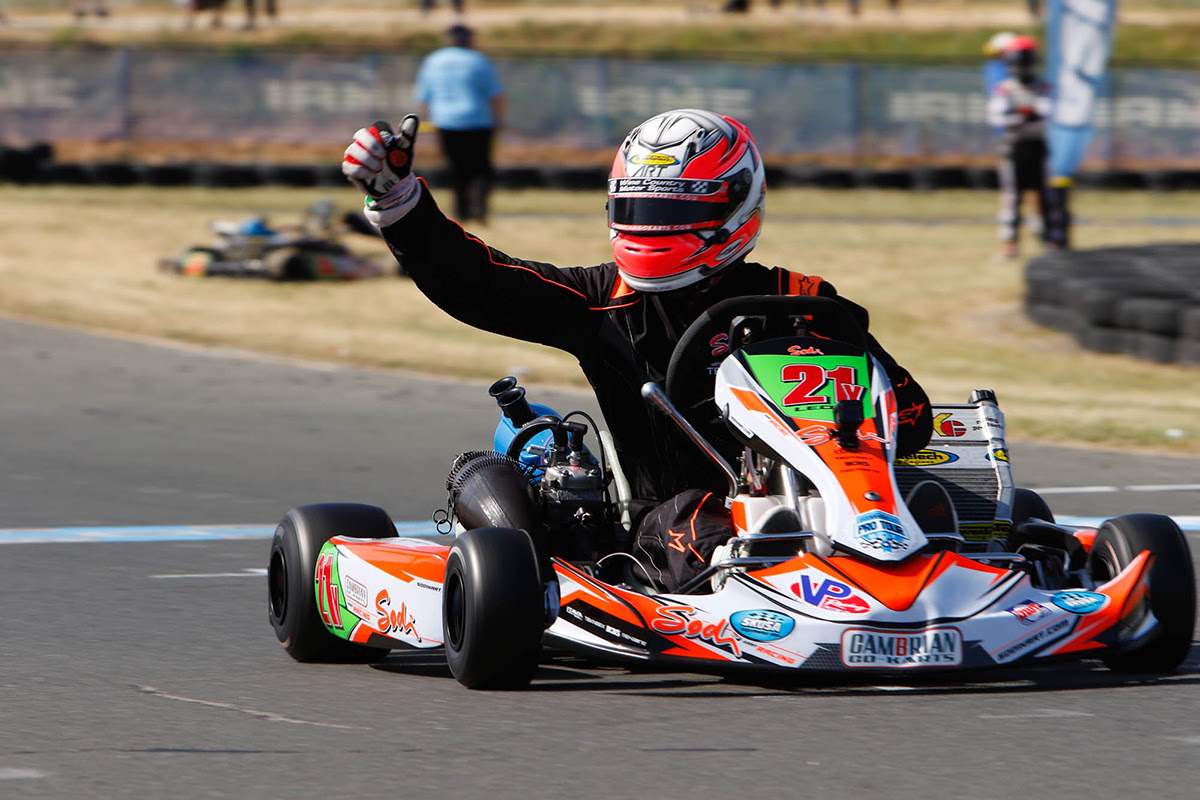 SwedeTech Racing Engines pulls off another Pro Tour podium sweep at the SuperKarts! USA (SKUSA) SpringNationals in Sonoma, California. The California based engine builder has swept at least one podium at every Pro Tour round since the 2016 SpringNationals, continuing their streak this weekend. Two pole positions, five prefinal wins, three main event wins, and nine podium appearences were garnered by SwedeTech powered drivers at the second stop on the Pro Tour schedule. The team was once again on site at the event delivering trackside support to all of their drivers, ensuring they had the support needed to produce strong results.
SwedeTech dominated the S1 Pro class on Saturday, sweeping the top-three spots in qualifying, the prefinal, and main event. Gary Carlton of Leading Edge Motorsports landed his SwedeTech-powered FK chassis in the pole position, followed by Nic LeDuc from Cambrian Karting on his SodiKart in second. Third place went to Mathias Ramirez of Andersen Karting on his BirelArt, with Jake French from Dallas Karting on his SodiKart following close behind in fifth. The prefinal found Carlton and LeDuc on top once again, followed by French in third, Ramirez in fifth, and Hunter Pickett of Flavor Insights with an Aluminos chassis under him, in sixth. The main event led to a podium sweep for the SwedeTech team, with LeDuc taking the win in round three, followed by Carlton in second and French in third. Ramierez scored a fourth place finish, and Brian Keck of Keck Racing on his CRG came in sixth with a great drive from his 13th place starting position.  This was Nic LeDuc’s first Pro Tour win, and it was a popular achievement amongst his driver peers and the attendees.
Sunday called for more fast laps and podium finishes in the S1 category. In qualifying, Pickett earned the off-pole position, followed by Carlton in fourth, Ramirez in fifth, and French in sixth. The prefinal was a top-five sweep for SwedeTech team members, with Carlton taking the win, followed by French, Pickett, LeDuc, and Ramirez, respectively. In the final, French crossed the line in second with Pickett and LeDuc following closely in third and fourth, allowing Swedetech two of three podium positions.
In S2, SwedeTech driver Gianfranco Mazzaferro of PSL Karting BirelArt qualified fifth in Sunday’s event, however received a DQ due to rear width.  In the prefinal, Mazzaferro started in the 20th spot and worked his way into seventh.  In the main, he managed a fifth place finish. Darin Marcus of Adkins/Ryan Perry Motorsports piloted his SwedeTech-powered Tony Kart to a sixth place finish in the main event.
SwedeTech was a consistent top-five contender throughout the weekend in the S4 category. On Saturday, Renato David of Orsolon Racing  took the prefinal win on his BirelArt, followed by Rene Martinelli, TB Kart USA, in fourth, and Richard Heistand from PSL Karting BirelArt in fifth. In the main event, David earned a spot on the podium with a third place finish, followed by Ryan Kinnear of Champion Racing in fourth. On Sunday, David qualified in the third spot, followed by Victor Jimenez of MSquared in fourth. The prefinal racing action found Kinnear finishing in the second spot, followed by VemmeKart driver Terry Lawrence in third, and Jimenez in fifth. In the main event, Kinnear took home the win, with David, Jimenez, and Martinelli scoring fourth, fifth, and sixth place.
In S4 Super Masters, team driver Robert Marks of Team Visalia earned the win in Saturday’s prefinal action. In the main, Marks suffered some bad luck, and was forced to retire from the race early due to mechanical issues. Nick Firestone of Pure Karting scored a second place finish in the main, representing SwedeTech on the podium. On Sunday, Marks returned looking for a comeback. He drove his SwedeTech powerplant to the front and never looked back, sweeping all three sessions and earned the main event win.
For more information on SwedeTech, please contact them at 916.687.3980, email Info@SwedeTechRacing.com or visit them online at www.SwedeTechRacing.com.
tags: California CRG Darin Marcus Kyle Adkins SWEDETECH tonykart
previous SECOND SPLENDID VICTORY FOR CRG AND DE CONTO IN THE KZ EUROPEAN CHAMPIONSHIP
next ROK CUP MIDWEST ROUND 1 REGISTRATION IS NOW OPEN