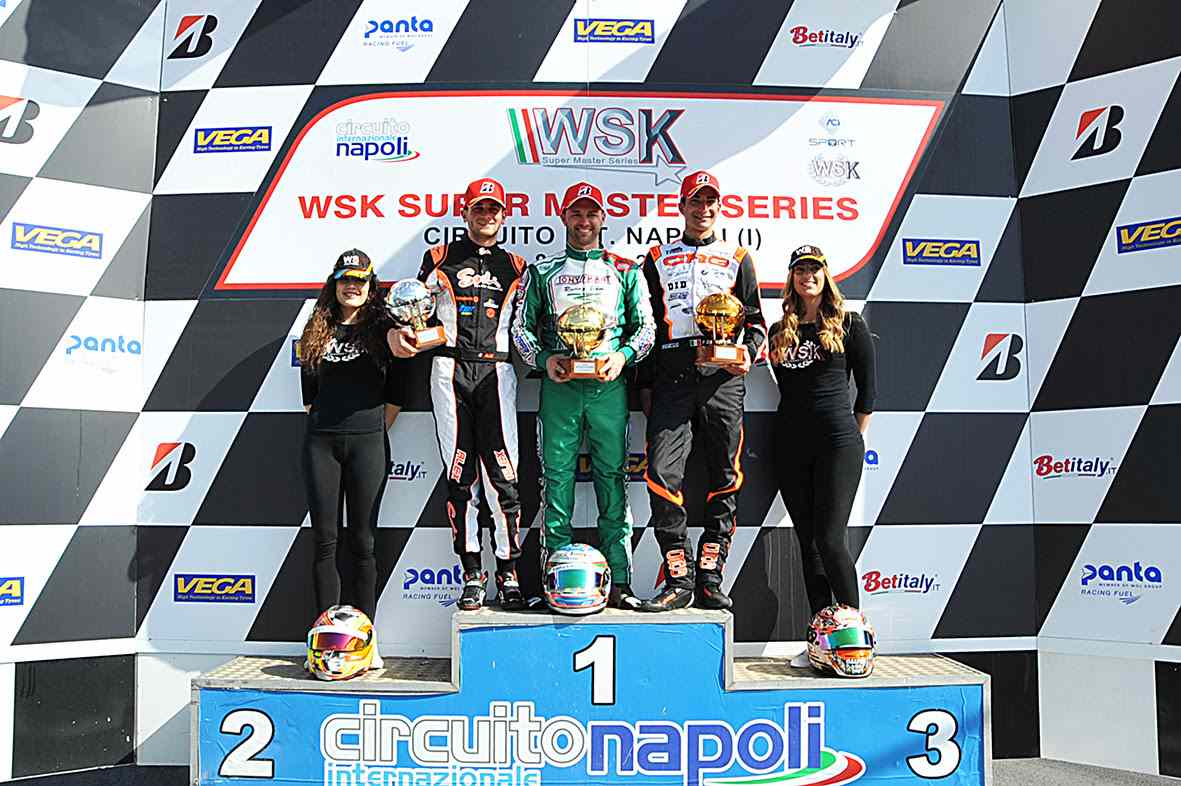 THE KINGS OF WSK SUPER MASTER SERIES 2018 CROWNED IN SARNO: MARCO ARDIGÒ (I – TONY KART-VORTEX) IN KZ2, HANNES JANKER (D – KR-PARILLA) IN OK, GABRIELE MINÌ (I – PAROLIN-PARILLA) IN OKJ AND MARTINIUS STENSHORNE (N – PAROLIN-TM) IN 60MINI. ALL THE WINNERS CELEBRATED ON TRACK AT THE END OF THE RACE.

Celebrations on the WSK podium.
Another edition, the 9th, of WSK Super Master Series has ended last Sunday: the International Circuit Napoli in Sarno (I) has staged the thirtieth race of this series in the 13 years long history of WSK Promotion. The organization based in Maglie (Lecce, Italy) has been working in International Karting since 2006, and has celebrated on the podium the drivers that emerged at the end of the four scheduled rounds. The kings of categories KZ2, OK, OK Junior and 60 Mini eventually had the chance to hold in their hands the classic WSK globe, that is the trophy given to the top 3 drivers in the final standings.Unexpected triumph for Marco Ardigò in KZ2.
Maybe not even Marco Ardigò (Tony Kart-Vortex-Bridgestone) expected to get back to the victory so quickly in the WSK Series. The season being already started, he made his debut at the round held in Muro Leccese and proved to be effective since the beginning (second place scored in Apulia) and victorious soon afterwards taking the victory in the first of the two rounds held in Sarno. A couple of calculations placed him well within the title hunt, result that he achieved last Sunday. Category KZ2 has been very exciting with the young and strong driver from Apulia Alex Irlando (Sodi Kart-TM) leading the pack early on, before being dethroned by the more experienced Paolo De Conto (CRG-TM), who took over the lead after winning the round held at the World Circuit La Conca. A spectacular finale has seen an uncertain outcome until the end, and the final ranking saw Ardigò leading Irlando and De Conto in this order (in the photo on top, the final WSK podium of KZ2). Behind them, the Czech Patrik Hajek (Kosmic-Vortex) and Finn Simo Puhakka (Tony Kart-Vortex) have also run a strong campaign.

The German Hannes Janker (KR-Parilla-Bridgestone) started off like a hare, surprisingly leading OK since the opener in Adria in early February. He was later on dethroned by the Dane Nicklas Nielsen (Tony Kart-Vortex) in the first of the two rounds held in Sarno. He needed a very strong performance in the closing weekend to take the final win: this is exactly what the German has managed to do, winning everything up to the triumph in the Final last Sunday. Nielsen, second and slightly disappointed, scored a good result anyway proceeding the good British driver Jonny Edgar (Exprit-TM) in third place. The Swede Noah Milell (Tony Kart-Vortex) had a great finale and secured P4, while the Spanish driver Pedro Hiltbrand (CRG-TM) grabbed a positive 5th position.

Victory in OK Junior to Minì on a knife’s edge.

The surprise of this season in OK Junior has been the driver from Palermo Gabriele Minì (Parolin-Parilla-Vega), who has been fighting with the early classification leader from Russia Kirill Smal (Tony Kart-Vortex) since the beginning. Smal had a catastrophic closing weekend that ended with an early retirement in the Final though. The Russian had already lost the lead of the classification after the Prefinal, since an exciting neck to neck battle had given the lead to Minì. The latter just had to settle to P5 to clinch the trophy leading an also very effective Gabriel Bortoleto (CRG-TM) from Brazil, who has been very competitive for the whole season too. The Estonian driver Paul Aron FA (Kart-Vortex) ha a crescendo of results and was launched to the third place of the classification by the victory in the Final race held in Sarno. A great performance in the closing round promoted the British driver Taylor Barnard (KR-Parilla) to the 5th place, behind Smal, who closed his campaign 4th.

Martinius Stenshorne (Parolin-TM-Vega) managed to keep the lead of the classification in 60 Mini all the way to the end of the 4 WSK rounds. On top of the classification since the opener in Adria, this young and promising Norwegian driver saw strong rivals of the likes of the Italian Andrea Antonelli (Energy-TM) and the Polish Tymoteusz Kucharczyk (Parolin-TM) closing in on him. The two exchanged position amongst themselves but never managed to get past Stenshorne, and the closing victory in the Final last Sunday earned him the winner’s trophy. The Polish driver Karol Pasiewicz (Energy-TM) also fought well among the front runners and he closed fourth, followed by the Swede Joel Bergstrom (IP Karting-TM), who scored a good fifth place.