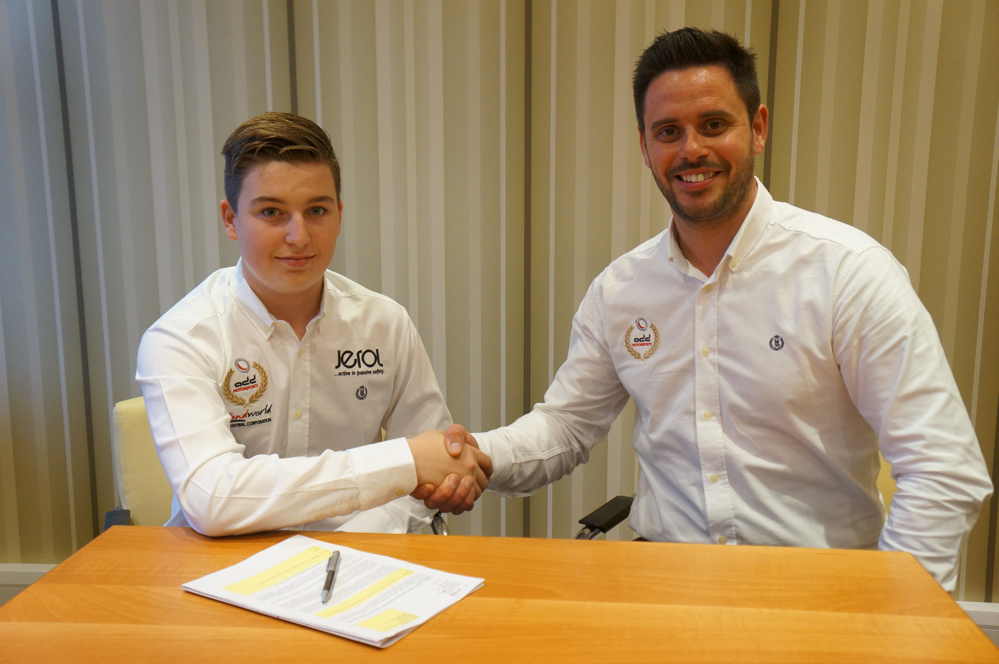 Multiple karting champion Jack McCarthy has signed for leading management company, ADD Motorsports. Fresh from his double podium success in the recent Awning Company Super One Series opener, Jack McCarthy and ADD Motorsports have announced a new deal to carry the highly rated Kent teenager’s career forward.ADD Motorsports Director Fraser Sheader said: “Jack is the real deal. You’ve only got to look at his results to see that and we like his style and his clear determination to win. Obviously, with any 15-year old, there’s some polishing to be done and the transition from karts to cars is always tough – but that’s where our experience will allow Jack’s talent to hit the ground running when he graduates to cars.”

McCarthy’s performances and results in 2015 brought him to the attention of the Ferrari Driver Academy and the Strawberry Racing star was duly invited to join three other drivers at the legendary marque’s Maranello base last October. McCarthy’s three-day stay culminated in a run in an Italian Formula 4 car around Ferrari’s Fiorano test track. Despite impressing during his maiden slicks-and-wings run, Jack has committed to stay in karts for another season, graduating to the Senior Max ranks for 2016 with Strawberry. The move paid instant dividends when McCarthy won the British Open championship at Rowrah in Cumbria (13 March), before taking a win and runner-up finish in the opening round of the Super One Series just a week later (20 March).

“It’s essential that Jack keeps learning and pushing himself,” observes Sheader. “At least a year of senior karting is essential. Drivers often jump out of karting much too early, as it is all too easy to be drawn in by the new formulas aimed at youngsters and the similar-looking budgets. Our plan will be to start getting Jack ready (for his transition from karts to cars) towards the end of this season. Winning in karting is the aim this year, winning in cars is next year’s goal.”Explaining that process, Sheader says: “We will gently introduce Jack to the differences between karts and cars, both on and off the track. We’ve got many different tools at our disposal to help him get used to driving bigger machinery and accelerating that process. Jack is a smart boy with masses of talent; he’ll get his head around the goals we set pretty quickly. Another key difference will be Jack’s commercial responsibilities, few karters have the opportunity to practice this area, and sponsorship becomes a big part of any driver’s day-to-day life once they start to climb the ladder.”Fraser is understandably cautious about making a clear-cut prediction of Jack’s future prospects, stating: “It’s far too early to say exactly where Jack will end up in the next 5-6 years. Formula 1 will be the goal but we have to remain open to other directions too. If he performs in cars, like he already has in karting, we can help open the doors with key manufacturers and scholarships.”

With the same team that has guided Lando Norris to such acclaim and success on his switch from karts to cars, now looking after his own career, Jack is clearly excited – “After winning the British and European titles and then being invited to attend the Ferrari Driver Academy, there were a lot of people keen to help me but when ADD Motorsports got in touch I was immediately interested. You only have to look at what they’ve been able to achieve with Lando and the success he’s had, to think ‘I want some of that’. So yes, I’m delighted to be on their books and believe that Fraser and Mark (Berryman) will help me to achieve the absolute maximum.”

“My main focus right now is to be a front-runner in Senior Max and challenge for wins. It would be amazing to add the Senior to the Junior titles I won last year. It will be extremely tough but that’s what I’d love to do. I’m also keen to try some different types of karts, such as KZ (gearbox), which will help me learn some new skills. Later in the year, I hope to be doing some car testing but that’s in the future. Winning in karts is what’s most important to me right now.”