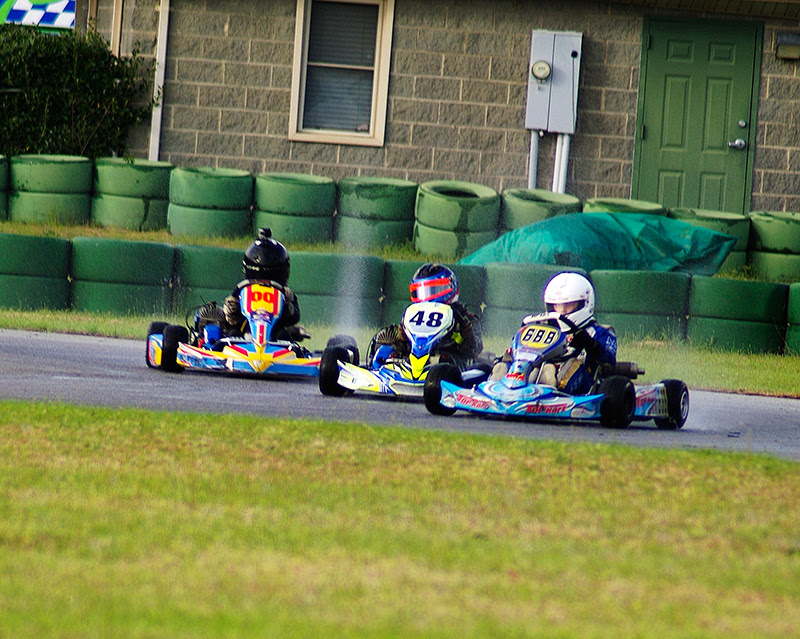 Trull won four of the six 2-cycle Cadet finals and added a plethora of heat wins and MGM Chassis Pole Awards, while Towles won three of the four 206 Medium and Heavy finals and dialed up a perfect 5 for 5 record in heat race competition between Saturday and Sunday.


Colin Warren was the only driver to beat Towles all weekend. The Florida driver had Towles on the ropes in the rain in Saturday’s 206 Medium main only the lose power in his engine late in the race and hand the win over to Towles. On Sunday, Towles looked like the clear favorite but Warren would out-duel him throughout the middle portion of the contest and hold off a charging Towles in the final laps to score the win.

Other top winners on the weekend were the father-son team of Joey and Brently Miller. Joey won every round of 206 Masters competition and young Brently prevailed in both 206 Kid Kart finals over some stout competition.

Here’s a quick rundown of each category’s racing at CMP.

Four kid karters were in attendance to kick off the series. Peyton Bridges and Brently Miller – both driving Razors – split the MGM Chassis Pole Awards and Bridges swept Saturday’s 8-lap heat races. The main event saw Miller jump out to an early lead and hold off Bridges and Bryce Sanders in a close race. Rachel Richter would settle for the fourth position on the podium.


Sunday’s final was another close run with Miller jumping out to an early lead and Bridges running down the Florida driver during the mid-portion of the race. Bridges would settle in right behind Miller for the second half of the race, looking for an opening which he was unable to find. Miller would score his second win of the weekend with Bridges second, Sanders third and Richter fourth.

Eli Trull was the class of the field on his #48 Fullerton chassis. Trull would sweep Saturday’s three finals in this category, scoring wins in Yamaha Cadet, Target Distributing TaG Cadet Restricted and TaG Cadet Unrestricted.

Saturday’s TaG Cadet Restricted saw Trull win both heat races and prevail in the final by a close 0.271-second margin over Danny Dyszelski, who also finished runner-up in both heats. Rubio-Luengo was third, Cantrell fourth and Bryce Sanders fifth.

Saturday’s last race of the day – TaG Cadet Unrestricted – was held in wet conditions after a brief shower passed through the Kershaw area. With the Vega W5 rains bolted on, Trull led early with Tanner Carter and Brewer Davis close behind. A lap 3 incident involving Davis and Lucas Vera led to the end of their race, and Trull jumping out to a big advantage over Carter. Trull would win the contest by over 16 seconds over Carter with Davis and Vera credited with third and fourth.

Rubio-Luengo would stay glued to Trull’s rear bumper in Sunday’s Yamaha Cadet main event. Trull would hold off the Georgia driver in a photo finish at the finish stripe, officially crossing the line 0.066 seconds ahead for his fourth win of the weekend. Cantrell was third and Davis settled for fourth.

Close competition in 206 Senior Heavy
Close competition in 206 Senior Heavy
One of the wildest races of the weekend occurred in Sunday’s TaG Cadet Restricted final. Trull was leading midway through the race until he spun abruptly in the 0.7-mile circuit’s infield. Drivers including Dyszelski and Rubio-Luengo took evasive action to miss the spinning Fullerton, and the race stayed green.

Trull would keep his composure and return to action not far behind the lead pack. He would slice his way back to the front of the field, passing Sanders, Cantrell and Dyszelski on his way to the rear bumper of the leading Rubio-Luengo. Contact between Trull and Rubio-Luengo sent the Luengo kart off the track in turn 7 and resulted in a one-position penalty for Trull, giving the win to Dyszelski. Trull was second, Sanders third, Cantrell fourth and Rubio-Luengo fifth.

Your ads will be inserted here by

Please go to the plugin admin page to
Paste your ad code OR
Suppress this ad slot.

The weekend’s final race saw twin siblings Isabella and William Robusto battle it out on their COMPKART chassis in the TaG Cadet Unrestricted main event. Isabella would score the close 0.190-second victory over William, while Tanner Carter finished 11 seconds back in third. Vera was fourth and Trull rounded out the top five.

A great race ensued in Sunday’s 206 Cadet final with Carter, Carter Beegle, Danny Dyszelski and Elijah Skaggs breaking away from the field and racing nose to tail throughout the entire contest.

Beegle snatched the lead away from Carter on several occasions only to lose it right back to the Georgia driver. Carter paced the field throughout the second half of the race and held off a hard-charging Beegle by just 0.222 seconds. Dyszelski finished right behind in third with Skaggs just off of his rear bumper in the fourth spot. Lloyd would round out the top five with Reed and Kelly Puckett finishing in the sixth and seventh positions, respectively.

Cade Frazier made it look easy in Briggs & Stratton Racing 206 Junior. Driving an MGM chassis, the North Carolina racer won both heat races and the main event Saturday without any pressure from behind. Ian Habiuk would settle for second in the final with Louisiana’s Macon Moore retiring early and credited with third.

On Sunday, Frazier jumped out to the early lead in the main event and would cross the finish stripe over 8 seconds in front of Moore. Habiuk gave Moore fits throughout the race, but would finish a couple of kart-lengths back in third.

Razor Chassis / TSRacing.com 206 SENIOR / IONIC Edge Chassis 206 MASTERS
While most teams entered either Razor Chassis / Roberts Kart Shop 206 Senior Medium or TSRacing.com Senior Heavy, Jacksonville, Fla., driver Corey Towles opted to run both and attempt for the $600 prize if he could score the overall win in both classes.

Towles had no problems in the 206 Heavy division, sweeping the class’s main events with wins over South Carolina’s JT Swygert both days. Towles would win Saturday by an 8-second margin over Swygert’s COMPKART with Austin Queen third, Joseph Skaggs fourth and Ryan Taylor rounding out the top five.

On Sunday, Towles drove his Eagle to a 4-second win over Swygert to wrap up the $300 first-place prize. Skaggs was third, Queen fourth and Taylor again fifth.

The race for the win was closer in 206 Medium with TS Racing factory driver Colin Warren pressuring Towles throughout the weekend. Rain, which was predicted for all day Saturday, finally hit around 5pm with only two finals left to run. 206 Senior Medium was already on track with it began raining, and the class would run the race on slick tires in very wet conditions.

The race went on as the rain was steady but not causing unsafe conditions, and Warren hounded Towles throughout the first half of the race and taking the lead away for the first time all day. Towles spent several laps attempting to retake the lead for Warren, and was finally able to when Warren’s engine began to cut out with only a couple of laps remaining. Towles would take advantage and retake the lead from Warren and pull away for his second win of the day. Warren settled for second with Aren Smith third, Aly Antley fourth and Haley Kummer completing the top five.

Sunday’s 206 Medium race saw Warren and Towles go head-to-head in the dry with Towles leading early before Warren would shoot his Eagle chassis to the front at the midway point. Towles worked on Warren until the final lap, when Warren slipped slightly in turn 7, allowing Towles to close the gap. But Towles would not have enough to overtake his fellow Floridian competitor, and he followed Warren to the stripe for the first time all weekend.

Towles and Warren would tie for the $300 prize and with no tie-breaker printed, the pair would split $250 for their efforts. Aren Smith was again third with his twin brother Tyler Smith fourth and Kummer in fifth.

tags: AKRA BRIGGS & STRATTON
previous KARTING COMMUNITY UNITED LO206 CHALLENGE AT FINAL ROUND OF THE CHALLENGE OF THE AMERICAS AT SIMRACEWAY
next US OPEN AND SKUSA ARRIVE AND DRIVE PROGRAMS AVAILABLE WITH PSL KARTING